What do you think about black metal 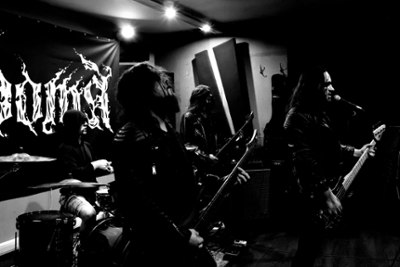 Neil, singer of the Russian black metal band, tells us a little about his homeland, the proximity to Finland and why his band released the album "Immemorial Existence" on cassette.

You are from St. Petersburg. I have to admit that Russian bands rarely find their way into our magazine. How is the scene with you? Or better: the metal scene?
We have some exciting places in Russia where heavy music is played. In the last five years there have been some great black, death and heavy metal albums from Russia. Concerts, of course, look rather meager, especially because of the corona virus, but that probably applies to everywhere.

St. Petersburg is not that far from Finland. Do you think the Scandinavian music scene is a big influence on you?
Yes! Finland is beautiful and very close, whenever possible we go over as fans to visit festivals. We haven't played any concerts ourselves yet. And of course the influence that Scandinavia has on us is enormous. Hence our desire to compose music and to found EDOMA.

Your album has already been released on cassette. That sounds kind of weird now that everything revolves around streams and playlists. Is the cassette even more of a thing in Russia? Or is it more like here that this is more of a collector's item.
We have produced a small edition of cassettes together with the English label Analög Ragnarök, and they look great! And yes, the cassette is still alive and it seems to me that the demand for it is growing. Of course, a lot of people only listen to music as a stream, but I'm not one of them, for example. I prefer the physical medium. Listening to music is a completely different ritual, I enjoy the whole process. It gathers all the work from the many people, from the musician, songwriter, sound engineer to friends who may have given advice or are on the same musical wavelength. And of course there will always be people who collect tapes. I like cassettes, especially when they are so beautifully designed and sound like a bomb.

How does a Russian band end up on a Dutch label?
We got an offer from Petrichor in August, they offered us a contract and wanted to release “Immemorial Existence” on vinyl, CD and cassette. We really didn't expect that and were very happy about such an offer and of course we accepted. We hope that the album will reach more people, which in turn is a great motivation for us to work on new material.

What are you planning for 2021?
We definitely want to play our first concert. We are currently preparing, working on our skills. We are also tinkering with new songs, which is slowly developing into an album. I think there will be a single with the new stuff soon. We will see. It's been a tough year for everyone.