How does the concrete mixer work 1

The concrete transported in truck mixers comes from stationary mixing plants. While driving to the construction site, the drum mixes the concrete at a low speed.

Technology on the doorstep

Ready-mixed concrete is one of the most important building materials. In Germany, around 2,300 plants produce around 60 million cubic meters annually. The ready-mixed concrete is brought to the construction site by truck mixers that travel on three to five axles and processed immediately. 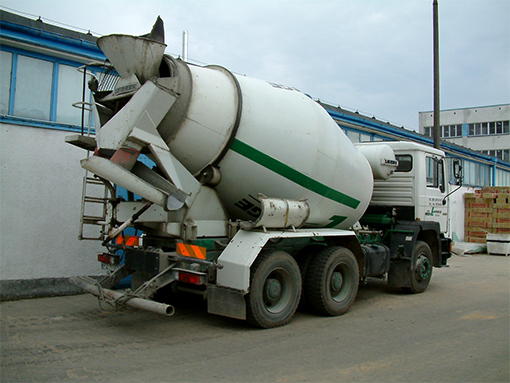 The truck mixer drums hold 6 to 10 cubic meters of concrete.

The concrete transported in the truck mixers comes from stationary mixing plants. These mix the aggregates through compulsory mixing devices in which mixing shovels move and stir gravel, sand and cement. The later mixing while driving in the slowly rotating drum should prevent segregation of the concrete. This "agitation" also prevents the material from sticking to the drum wall. The range of action of a truck mixer is around 20 km. In warm weather, longer stretches become problematic because the concrete can then set. 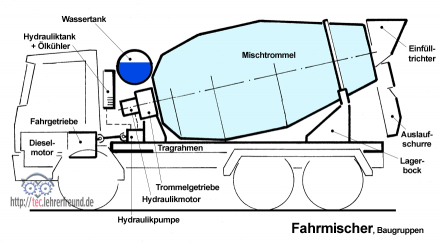 - Carrier vehicle with base frame as well
- Mixer assembly with the drum drive. The picture shows an overall view of a truck mixer. The most important assemblies are the support frame formed from U-profiles, the rear bearing block with the discharge chute holder and the front bearing block with the flange-mounted drum gear and the front drum bearing. The front and rear bearing blocks are firmly mounted on the support frame with so-called clamps. Brackets are U-shaped bent U-bolts.

The unscrewable filling funnel hangs in a tubular frame above the rear bearing block. The mixing drum is supported by a strong pin in the front of the drum gear; at the back it lies with a bearing ring in two support rollers. The lockable swivel chute is mounted on the rear bearing block; with the help of a crank it can be adjusted in height. The discharge chute can be extended with additional channels carried on the mixer.

A water tank is required for the water supply; it sits between the cab and the mixing drum. Depending on the type of construction, the domestic water is conveyed via a water pump flanged to the gear unit or via a special compressed air line. The water carried along is required to clean the mixing drum and the chute after the concrete has been emptied.

Mixing spirals made of wear-resistant steel are welded into the mixing drum. The water pump is flanged to the drum gear.

A power take-off from the truck drives a hydraulic pump via a cardan shaft. It conveys the oil to the hydraulic motor, to which a planetary gear is flanged. This reduces the high hydraulic motor speed (approx. 2000 1 / min) to the drum speed (20 revolutions per minute and less). The cardan shaft bridges the gap between the drive gear and the mixer pump.