Why was Vladimir Lenin important 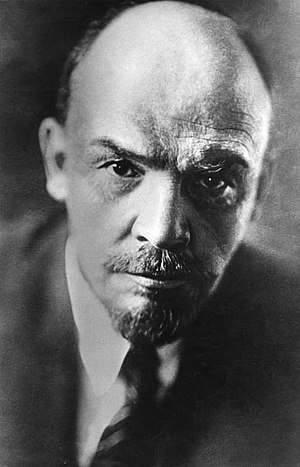 Vladimir Ulyanov, better known as Lenin. The picture is from 1920, when he was 50 years old.

Lenin was a politician from Russia. He lived in a time when the country was ruled by the tsars, the Russian emperors. Lenin was a communist and began a revolution, that is, political change by force. From this came the Soviet Union.

His real name was Vladimir Ilyich Ulyanov. He was born in 1870 and came from a wealthy family. His older brother wanted to kill the tsar and was executed. Then Vladimir decided to fight the tsars himself. For this fight he called himself Lenin.

Lenin got to know the ideas of Karl Marx. Marx had claimed that the rich would get richer and the poor get poorer. That is why the poor should unite and fight the rich in order to come to power themselves. Lenin said that one shouldn't wait for the poor to do it themselves. There has to be a group that takes the lead.

First Lenin was a member of the Social Democratic Party in Russia. However, he and his supporters separated from the Social Democrats. He called his new party the Bolsheviks. At that time Lenin lived mostly in Switzerland and other European countries to be safe from the Russian police.

During the First World War, Lenin managed to come to power in Russia. After this October Revolution, in 1917, Lenin suppressed the other parties. The civil war broke out, which Lenin won. In 1922 he turned Russia and occupied neighboring countries into the Soviet Union. It is considered the first and largest communist state in the world.

What became of him after his death?

The cartoon says "Lenin cleanses the world from evil". This means kings, orthodox and rich people

Lenin died just two years after the founding of the Soviet Union. Some time later, Josef Stalin became his successor. Some people claim that Lenin was a good man. Only Stalin turned the Soviet Union into a country in which many millions of people were killed. Today we know, however, that Lenin already thought it right to kill everyone who was against the Soviet Union. He is responsible for the deaths of thousands of people.

Many monuments were built to Lenin, both in the Soviet Union and in countries that were oppressed by the Soviet Union. After the fall of the Soviet Union, many of them were demolished. There were even cities that got his name. Children had to sing songs about him.

After his death, Lenin's body was not buried but embalmed. In this way the body did not rot, but was preserved. A building was built for him at the Kremlin in Moscow, a mausoleum. Anyone visiting Moscow can still see the dead Lenin there today.