What are Himalayan salt blocks

Himalayan salt is a pink rock salt, which originally comes from the Himalayan region, but is now mainly extracted in central Pakistan. In contrast to conventional table salt, it has small traces of other minerals. This is advertised with health benefits. There is no scientific proof of the said positive effects on health.

The composition of Himalayan salt is 98 percent identical to conventional table salt. The Bavarian State Office for Health and Food Safety has also proven eight other minerals that are not contained in conventional table salt - but most of them only in minimal traces. These are iron compounds that cause the slightly pink tint of the salt.

The need for sodium chloride can be covered with Himalayan salt - the same applies to conventional table salt. The daily requirement of other minerals is not covered by the salt or promoted in a decisive way. 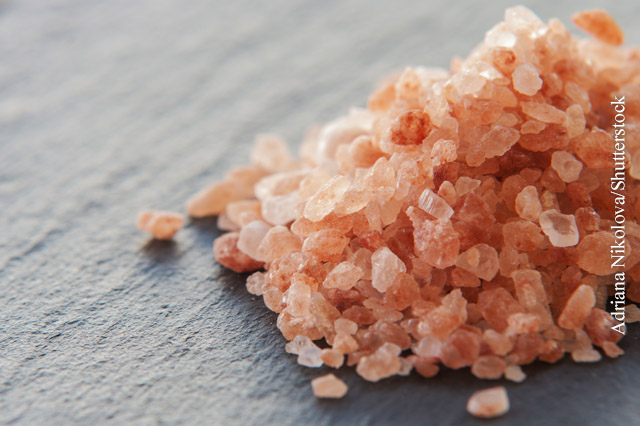 Himalayan salt as a dietary supplement

Dubious sources advertise Himalayan salt as a panacea, for example against diseases such as gout or high blood pressure. In addition, the salt should have a detoxifying effect and regulate the acid-base balance in the body. None of these advertising claims have been scientifically proven. For this reason, a health-promoting effect may not be advertised.

Much of the pink salt does not come from the Himalayas, but from central Pakistan. This must not be labeled with Himalayan salt. It is often called "from Pakistan" or just "pink crystal salt".

Who is Himalayan salt suitable for?

Himalayan salt is only suitable to a limited extent as an alternative to table salt. Since, according to the German Nutrition Society (DGE), the iodine supply in parts of the German population is in need of improvement, the DGE recommends that it is better to use iodine-enriched standard table salt.

Disadvantages of the Himalayan salt are its price and long transport routes. At 4 to 5 euros per kilogram, pink salt costs 5 to 10 times as much as conventional table salt. Because of the distant mining region, the consumer advice centers give the environmental rating “unsatisfactory”.

Side effects of Himalayan salt

The German Society recommends using salt sparingly - a maximum of 6 grams per day. Since this amount can quickly be exceeded by consuming processed products, the additional consumption of Himalayan salt is not advisable. Studies have shown that high salt consumption promotes the development of high blood pressure.

Experts at the consumer advice center judge the advice to lower high blood pressure with Himalayan salt as extremely dangerous for health. A decrease in blood pressure is not to be expected. But the high salt consumption could disrupt the metabolism and water balance and put strain on the kidneys, warn the experts.