Why was COBOL removed

The “Redvers Cloaking Device” encrypts the commands in your COBOL source code to completely protect your software against intellectual property theft. Understandable text, field, section and paragraph names are completely removed without changing the program logic.

In times of global outsourcing and the black market for industrial secrets, your valuable and confidential COBOL source code must be protected before it is made available to external service providers for inspection. The "Redvers Cloaking Device" offers you this protection and at the same time leaves the COBOL as source code so that it can be compiled and tested together with the rest of the code of your system.

If you develop commercial COBOL software, or if you use it, this protects "Redvers Cloaking Device" Your ideas and enables you to sell software as source code and thus make it usable on every COBOL platform.

The cloaking device (RCCLOAK) is an independent COBOL batch program that does not require any copy elements, include commands or objects. The RCCLOAK- Source code was self-encrypted to protect authors and customers from code changes by unauthorized persons. 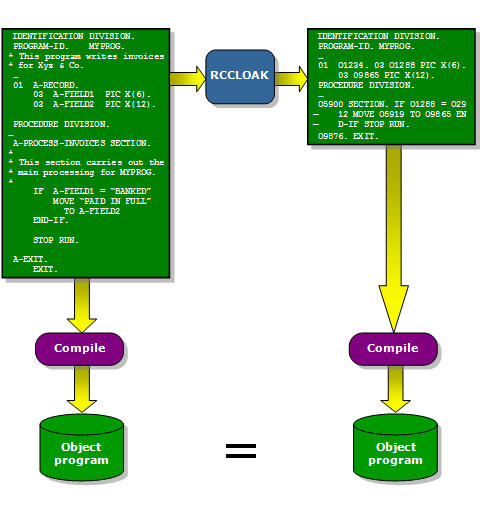 The product consists of a standard batch COBOL program (RCCLOAK), which is compiled like any other batch program. It has an input file (RCCOBIN), which is to be assigned to the source program to be encrypted, and an output file (RCCOBOUT) into which the encrypted source program is written. Both input and output files are sequential with a fixed record length of 80 bytes.

The source code to be encrypted can be any type of COBOL program from any hardware environment. It only has to meet the requirement that it has a record length of 80 bytes and one.

Here is an example of an encrypted source code: 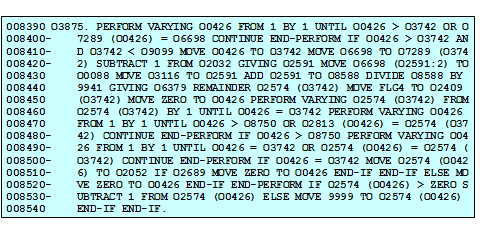 Once a program has been encrypted, the source code can no longer be decrypted to restore meaningful text and variable names.

The encrypted source code remains compatible with all COBOL standards. It can be compiled, linked, and executed as usual. Encrypted programs are currently in use on the following platforms: IBM mainframe, iSeries / AS400, UNIX, HP, Linux, Fujitsu BS2000 and Micro Focus.

Please note that the encryption algorithm is not able to check the syntax or validity of the source code. Therefore, if compilation errors occurred before encryption, the same errors will still be present afterwards.

In version 2.3 of the program the ability to encode literals in the Procedure Division was added. If these literals are left within the encrypted source code without encryption, they can provide important information about the functionality of the program, which could contribute to the decryption of the source code.