Are Zagreb Budapest and Prague similar 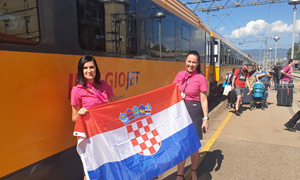 RegioJet will be using its night trains to Croatia again this summer. They will connect Praha, Bratislava or Budapest with Rijeka, Split and also Zagreb

RegioJet, the leading private passenger transport company in Central Europe, will be using its night trains to Croatia again this summer season. The first train is due to leave on Friday May 28th and will run on a new route: Prague - Brno - Bratislava - Budapest - Zagreb - Rijeka / Split.

Connecting buses from Rijeka, Split and Gračac will serve all holiday destinations on the Croatian Adriatic coast - from Istria to Dubrovnik. In addition, buses will also connect the holiday resorts of Kotor in Montenegro and Neum in Bosnia and Herzegovina.

RegioJet starts selling tickets in advance in February; the all-inclusive prices start at the same level as last year at EUR 22 for a single journey in a seated car and EUR 30 for a ticket in a couchette car. The prices include the entire on-board service, seat and bed reservations.

Radim Jančura, the owner of RegioJet comments: "We are back on our summer trains to Croatia. It is the light at the end of the tunnel and we look forward to carrying over a hundred thousand passengers on our Croatian trains this year. This year we can start all preparations much earlier and we believe that planning the summer vacation will also be more positive for our customers ".

The train connections will have a similar timetable as last year - with departure in the afternoon from Prague at around 5 p.m. and then in the evening from Brno and Bratislava and around midnight from Budapest.

Arrival in Zagreb and Rijeka will be in the morning of the next day, arrival in Split in the early afternoon. In the opposite direction, trains leave Split in the afternoon and Rijeka and Zagreb in the evening and arrive in Budapest, Bratislava, Brno and Prague the next morning.

The first train will depart on May 28th and in May, June and September the trains will run three times a week, with departures from Prague on Fridays, Sundays and Tuesdays, and from Croatia on Saturdays, Mondays and Wednesdays. Trains will run in each direction every day in July and August.

The train set will consist of sleeping cars and cars with seats. Thanks to the new route, RegioJet will also offer a completely new direct train connection from Prague and other cities to Zagreb; as well as from Budapest to Croatia or Bratislava.

The total capacity should reach more than 650 passengers in 15 touring cars. The RegioJet service will be available on the train, including free breakfast as part of the ticket price, internet access, the option to book the entire bed compartment for four people for the price of three, bicycle transport and other services that RegioJet also offered last year on his trains to Croatia.

RegioJet's trains to Croatia first operated last year during the summer season. In total, they carried more than 60,000 passengers in both directions and became a symbol of last year's summer holiday season. The average occupancy was 90%.