How to hang a picture

The work has already come a long way: it has covered a long distance in a narrow transport box and had to withstand the scrutiny of the restorers. But now it's in place, leaning against the wall. Just a little deep down.

At least that's how it usually works. In this case everything was a little easier, because the work we are hanging up today belongs to the Adolf Wölfli Foundation, which has been at home in the Kunstmuseum Bern since it was founded in 1975. The way from the depot to the showroom is therefore a short one. The picture now only has to be on the wall.

Before we pick up the drill, we have to do some math. Pictures should be hung at a height that is comfortable for the viewer. You should be able to look into the picture and the center of the picture at 1.5 meters has proven to be a good guide value. 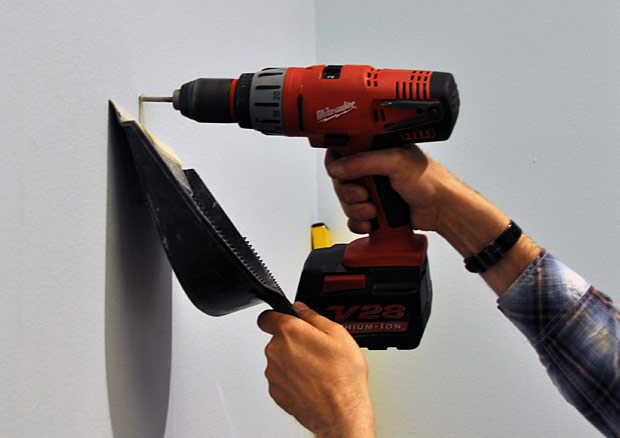 In order to be able to choose a suitable drill, we have to take a closer look at the wall. Many of the walls in the Kunstmuseum Bern are made of sand plaster. Screws don't have a lot of grip here and that's why we use a dowel. In our case we choose a 6-hole dowel and therefore a 6-hole borer. We can use a smaller borer for walls in which the screw grips enough without a dowel: for a 6-screw, for example, a 4.5 borer.

(So ​​that the picture stays in its place, we also secure it mechanically. Every museum has its own technology and we don't want to disclose ours here. After all, that's part of the theft protection.)

One last thing is still to be done: The picture should not only be horizontal, but also parallel to the wall. Especially when there are several pictures in the same room and hanging on the wall at different angles, it just looks bad otherwise. It is also easier to properly illuminate a picture that is hanging straight. We therefore put two pegs under the back, on the lower edge of the picture. As soon as the picture is straight, we're done. And it's the turn of the next work.

Posted in Behind the Scenes
Tags: making-of, collection, technology, Wölfli