What is an induction system

Induction system for industry should generate an output of 20 kilowatts

The start-up Blue Inductive from Freiburg is initially focusing on industrial robots. But the contactless charging technology should also help electromobility to flourish in the future.

Blue Inductive enables contactless charging of industrial batteries with previously unimagined efficiency. At least that is what the company around Johannes Mayer, whose name is emblazoned on the Forbes list of the "30 under 30 in Europe", promises. But how good is the technology compared to its competitors and where does the company see its market advantage?

In the footsteps of Nikola Tesla

Since Nikola Tesla first astonished his audience in New York in 1891 with the wireless transmission of electricity, there have been numerous attempts to translate this technology into practical applications. But it is only in the recent past that engineers have achieved the necessary efficiency that wireless charging technology requires with today's electricity consumption. Last but not least, for the up-and-coming electromobility there is a desperate search for practicable solutions that free them from busbars, overhead lines and the constant connection of unwieldy cables.

There are many ideas for this. Some companies use fuel or solar cells to generate electricity directly from the consumer. However, the technology required for this is usually heavy and unwieldy. Others automate the cable connection by robots or create conductive connections via charging contact surfaces on the vehicle floor. Complex maintenance can quickly reduce the efficiency advantage to an uneconomical level.

Blue Inductive was created in April 2016 as a spin-off from Europe's largest research institute for solar energy, Fraunhofer ISE, with the support of the University of Freiburg. The company's interest is still a long way from electrically powered cars and trucks. Electromobility is only the next step in product development.

The start-up is currently looking after the mobile industrial robot market. Forklift trucks in logistics centers offer the ideal research environment to later be prepared for the lucrative step into the automotive supplier market. Until then, it is a matter of collecting data and experience and arousing the interest of future cooperation partners.

Investors such as Phoenix Contact Innovation Ventures, the High-Tech Gründerfonds (HTGF), the VC Fonds Baden-Württemberg and the medium-sized investment company testify that Blue Inductive is on the right track.

The physics behind the blue inductive technology

Technically speaking, high-frequency alternating currents are sent through coils that create a pulsating magnetic field around them. In the recipient, the procedure is exactly the opposite. In the receiver coil, the changing magnetic field generates the required charging current, which flows to the accumulators via the internal cabling.

The distance between the coils is crucial, because the greater the distance, the greater the decrease in the effect, and thus the efficiency. In return, there are no maintenance-intensive problems, for example corrosion on the connectors, mechanical loads on robot motors or material abrasion on contacts.

An output of 20 kilowatts is well ahead of the competition

Blue Inductive itself praises the efficiency it has achieved. The company specifies this as 95% and thus even surpasses many wired systems. Furthermore, the new system should achieve charging capacities of 20 kilowatts, almost double that of the main competitor Qualcomm with 11 kilowatts of power. For comparison: Qualcomm charges a BMW i8 with 7.2 kilowatts in around an hour. If the values ​​of Blue Inductive are confirmed in practice, it would indeed be a technical breakthrough.
Blue Inductive mentions 20 centimeters for the required distance between the coils. That is more than sufficient for charging stations at parking lots, bus stops or the garage at home. Ideal for robot self-charging, the charging process starts automatically with the new system; another advantage for the user-friendliness of future e-car charging stations.

In the next generation of electric cars, another advantage of the technology is likely to speak in favor of installing it, because the power transfer works bidirectionally. Car batteries could be used in tomorrow's power grid as a buffer to stabilize the charging network. A problem that increasingly demands solutions in the age of wind and solar power.

A look into the future

If the technology from Freiburg delivers what it promises, inductive charging will soon be more convenient than refueling conventional petrol and diesel cars. The driver of the future will be allowed to stay in the car in rain and storm while the charging platform charges his batteries without contact. It can continue to drive in a good 15 minutes when fully charged. That's not much more than the time we already spend at gas pumps today.

But maybe the future will also bring us linear charging, in which designated charging lanes on the motorway recharge our batteries while driving. This is being tested on electric buses in the South Korean city of Gumi, among other things. Then the charge level would not tell us when to take a break, but our feeling of hunger or bladder pressure. A realistic further development with contactless charging systems.
It seems certain that Blue Inductive will be used in larger industrial companies that already operate their own wind turbines and photovoltaic systems. The symbiotic effect that connects the power hunger of industrial robots with the production peaks of environmentally friendly power generators is too great. 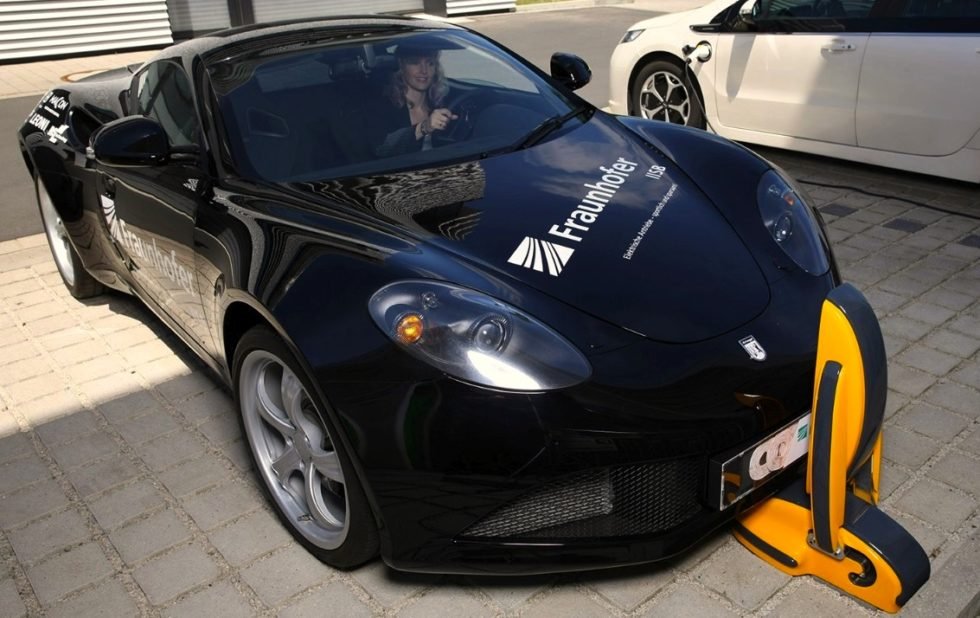 Contactless charging of electric cars via induction is still a long way off. Nevertheless, engineers are already working on the next generation of inductive charging technology. They move the coils out of the ground into a column. The receiver coil is right in the front of the car. As a result, the distance between the two coils is so small that the charging process works much better.

Because inductive charging solutions appear so attractive, the Fraunhofer researchers and the start-up Blue Inductive are not working alone on a solution. The German Aerospace Center is also dedicated to the subtleties of fast wireless charging. Fraunhofer researchers from Erlangen also announced in 2014 that they consider upright charging coils to be more efficient in inductive systems. Researchers and developers all over the world are also involved in inductive charging of aircraft such as drones.