1. Sat (Sanskrit स sa) is a letter in the Sanskrit alphabet, the third of the sibilant group (Ushman). "Sa" is also a Sanskrit prefix and can be placed before other words. "Sa" here means "with, same, similar". Examples are saguna, sachara. Sa can also mean “with”. There is e.g. Saguna, with properties, Sabija, with Bija etc. "Sam" stands for connectedness and is something different from Sa, but is connected with Sa. So there is samyoga, samprajnata samadhi. 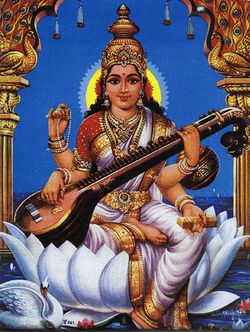 Saraswati - the goddess of music, the arts, wisdom and creativity

2. Sat (Sanskrit स sa) is one of the tones of the Indian scale. Sa is the first note, the root note.

3. Sat (Sanskrit स sa m.) often stands for due to the sound rules of sandhi सः saḥ, the nominative singular masculine of the demonstrative and personal pronoun Tad and means: he (masculine personal pronoun), der (certain masculine article), this, that, said.

Transcription of a lecture video (2014) by Sukadev about Sa

First of all, Sa is the name of a letter, Sa is a letter. Similar to how we say "Es" in German - we don't say: "S" - so in Sanskrit we say, for example, "Sa". And Sa is the letter S. Sa is also called He. For example, when referring to God, one can simply say: Sa - He. Also in German, if you capitalize Er, then God is meant. Sa (with a long a) is then called you. Sa is you and therefore the goddess.

Sa is also part of Sam and Sam means "with". In Indian you will often find Sa in different words: Savikalpa Samadhi, Saguna etc. So, Sa then means “with”. Actually from Sam, and that then becomes “with”. Sa (with a long a) is also the first tone of the Indian scale: Sa Ri Ga Ma Pa Dha Ni Sa. So these are the seven notes of the Indian scale, which by the way are similar to the western scale. I am not an expert in Indian music now, but Indian music also has a scale similar to Western music, which is why it is possible in the first place that the Indian kirtans could also be accompanied by the western-style harmonium. However, Indian music is a little different and more complex in some ways and simpler in another way than Western music.

Here are some links to Sanskrit words that either have a similar meaning in Sanskrit or in German as Sa or in German or Sanskrit in the alphabet before or after Sa: